Aliens are the main antagonists who invade the player's tank in Insaniquarium. They are the followers of Cyrax.

In the game, aliens will appear periodically, trying to attack, eat, or kill your fish. All you can do against them (aside from Gus) is shoot them with a laser gun.

Aliens are normally fended off by the player using a laser gun that can be upgraded to inflict more damage, however, a handful of pets can help out in the event of an alien attack.

Sylvester is a blue alien with no eyes, has 3 white claws on both hands, and has a tail instead of feet. He is the first alien ever to be encountered in the game. He eats your fish, but can only eat one at a time before he gets "full". He is the weakest alien in the game, as he can only resist up to 10 hits (with a class 1 laser). He appears in a multiple alien battle with Balrog in Tank 1-5, and debuts in Tank 1-2, and only appears in Tank 1 and Tank 2.

Balrog is an orange alien with red hair, red eyes, has fins on the sides of his head, a muscular body frame, 3 claws on both hands, and a tail. He is the second alien encountered in the game. Unlike Sylvester, he doesn't get full, and can resist much more damage. (up to 22 hits with a class 1 laser). He practically resembles that of a lion. He appears in a multiple alien battle with Sylvester in Tank 1-5, as well as a battle with psychosquid in Tank 4, and debuts in Tank 1-4. He appears in every Tank.

Gus, as described by the game, is a baby-faced man child, and has a fishtail. He is special from the other aliens as he cannot be defeated using lasers, except in Tank 5-1, and Sandbox Mode. Instead, you defeat him by feeding him fish food excessively until he bursts. Anything edible can damage him, your fishes, fish food and even star potions. He is the third alien encountered in the game. He debuts in Tank 2-3, and appears in every tank except in Tank 1.

Destructor is a robot with green eyes, spiky "teeth", and fires missiles at your fish. He doesn't directly eat your fish but uses fish-seeking missiles to kill them. He can only move around the bottom of the tank. He is the fourth alien encountered in the game. He debuts in Tank 2-4, and appears in every tank except in Tank 1, and can appear in a multiple alien battle alongside Ulysses in Tank 4.

After the release of the Deluxe Version, which was now entitled "Insaniquarium Deluxe", the game featured five new aliens.

Ulysses is a stone cyclops which fires energy balls at your fish. Unlike Destructor, 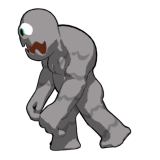 the two energy balls do not affect just the targeted fish, they can affect every fish in the tank, and if done poorly, it can kill the entire tank faster than expected, so if done right, the energy balls can be deflected back at Ulysses, damaging him greatly instead. He debuts in Tank 3-4, and only appears in Tank 3 and Tank 4, and can appear in a multiple alien battle alongside Destructor in Tank 4. 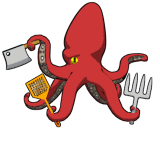 Psychosquid is just what the name says, a psycho squid who loves to eat your fish. He holds a butcher's knife, a fly swatter, and a fork. He is not as easy as the other aliens, who are simply defeated by being blasted repeatedly. After some time, Psychosquid will turn blue and drop down his tentacles. Beware not to fire at him, because instead of damaging him, you help regenerate his health! He is a serious threat especially if you don't know how to battle him. Debuts in Tank 3-3, and only appears in Tank 3 and Tank 4.

Some people might confuse him for an octopus. See the main article for details.

Bilaterus is a two-headed skeletal alien. Apparently, you have to battle both of them. Don't worry, not both at once. You have to beat one before proceeding to the other. Easy, right? That is if you can defeat him fast enough. If any fish touches any part of his body, yes, any part, well, bye-bye! Bilaterus can be a more dangerous foe than Psychosquid if not handled correctly. It debuts in Tank 4-2, and it only appears in its tank.

Do you dare face the evil alien mastermind, Cyrax? Well, of course you do! You need that egg! Or, shells... Don't expect it to be an easy fight, though. He can summon Mini-Sylvesters and any alien you encountered before (not all at once, except for Sylvester and Balrog, who both get summoned together)! He'll need about 50 hits before he goes down. He only appears in Tank 5-1.

A minion of Cyrax and a copy of Sylvester, who, despite being extremely weak, wastes no time in eating the player's pets, unlike his older counterpart. He only appears in Tank 5-1.

The alien battle music extended for 15 minutes:
Retrieved from "https://insaniquarium.fandom.com/wiki/Aliens?oldid=10570"
Community content is available under CC-BY-SA unless otherwise noted.