Niko is the second pet that you can get. He is a dark teal oyster with black eyes and purple "lips" that produces pearls for the player. 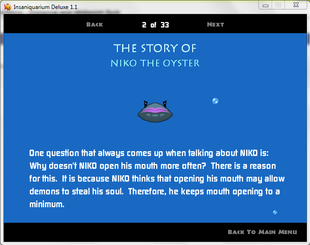 The tower top that Niko stays on in a Virtual Tank exclusive tank backdrop.
Add a photo to this gallery
Retrieved from "https://insaniquarium.fandom.com/wiki/Niko?oldid=9226"
Community content is available under CC-BY-SA unless otherwise noted.