RUFUS does heavy damage to enemies you've lured to the bottom of the tank.
$15,000

When players lure an enemy to the bottom of the tank, Rufus will proceed to swipe at it with his claws, inflicting heavy damage. He is exceptional against Destructor and Ulysses, as he attacks them immediately. He is one of the 4 attacking Pets, the others being Itchy, Gash, and Stanley. Although Gash does the heaviest damage agains Aliens, he doesn't have the danger of eating your Guppies.

"Rufus started his career as a dance instructor, teaching people how to do his patented pop and lock arm routine. When his dance studio burned down in a freak accident, Rufus became a mercenary for hire, using his dance skill to amplify his already potent fighting ability." 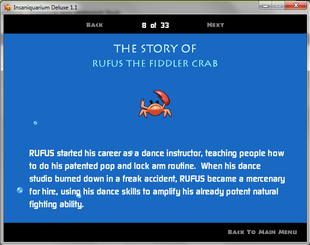 Add a photo to this gallery
Retrieved from "https://insaniquarium.fandom.com/wiki/Rufus?oldid=9508"
Community content is available under CC-BY-SA unless otherwise noted.