STINKY roams around the bottom of your tank, catching any coins you may have missed.
$450

Stinky the Snail is the first pet players will ever unlock. He is a green snail with a brown shell that roams around the bottom of the tank. He always moves in the direction of the nearest coin which he will collect.

Stinky roams around the bottom of the tank,objects of monetary value like: coins or diamonds. Even if money has touched the ground, he will aim for any money above him first. He is ideal in a player's Virtual Tank because he is one of only two pets that can collect money in screensaver mode, the other pet being Clyde.

When threatened by an alien attack, Stinky doesn't go to collect money and hides in his shell, giving Clyde an advantage over Stinky.

Stinky tends not to perform well with Nimbus because he leap up in tank,and Stinky in the tank and may even turn red with anger after not collecting any money in a while, although this is purely comical and has no effect on his performance. He will revert to his regular color after collecting money or hiding from an alien attack.

In the Virtual Tank, Stinky will fall asleep after three minutes of inactivity if not using screensaver mode.

"Stinky knew from the early age that he was different from the other snail. He had the fever. The money fever. He was all about collecting money. But why does Stinky need with all that money? Stinky answers,'It impresses the ladies.'"

The movement and changes of Stinky 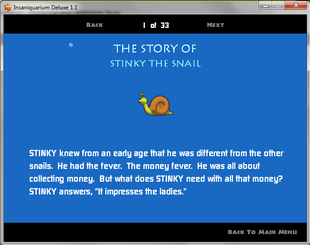 Stink's story
Add a photo to this gallery
Retrieved from "https://insaniquarium.fandom.com/wiki/Stinky?oldid=9328"
Community content is available under CC-BY-SA unless otherwise noted.